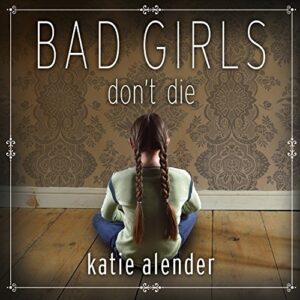 When Alexis’s sister Kasey is haunted by an antique doll, Alexis thinks she’s just her normal weird self. However, things get weirder when their home begins to change. Self-closing doors; boiling water on the stove has not turned off the heat; and an unplugged air conditioner blowing cold air.

Kasey is also changing. Her blue eyes turned green, she started using classical language, and she forgot about time. Most worrisome is the dangerous new chip on Kasey’s shoulder. The once gentle child was gone, and the new Kasey was angry. Alexis is the only one who can stop her sister – but what if that blue-eyed girl isn’t Kasey anymore?

I love creepy books. I have said that many times when reviewing a book. This is something I’ve been seeing for a while. Many of my students have read it and loved it! They kept telling me I needed to read it. I’m so glad I finally heard and did. In terms of creep factor, it’s good. Not the scariest thing I’ve ever read, but it made me want to scream “don’t go in there”. Once I felt my heart race because I wanted Alexis to stop and get out!

The story also has good twists and turns that I didn’t see coming. A couple of things I thought I figured out I didn’t, so that’s cool. It keeps me guessing what’s good.

I like Alexis very much. She is strong and determined. I love that she’s trying to put everything together and figure out what to do. I wish she would have accepted more help, but I understand why she wouldn’t. If I were in Kasey’s position, I hope Alexis would be on my side!

Thoughts on audiobooks: The narrator did a great job. I sometimes have a hard time with female storytellers because I notice they tend to talk nonsense and that annoys me. This narrator doesn’t have that. She keeps the story moving and definitely adds to the chill.

Best for: People who enjoy being suspenseful.
Best for ages: Around 12 years old and up. I’ve had many middle schoolers read it.
Image that sticks with you the most: There’s a scene where Kasey is just kind enough to show up after Alexis and that’s super creepy!