Cherry Bomb is the sixth mystery novel in the Jacqueline “Jack” Daniels Mysteries series by author J. A. Konrath.
Cherry Bomb, Jack Daniels’ sixth mystery, opens at the funeral. While Jack stood by the grave, tears in her eyes, her cell phone rang. 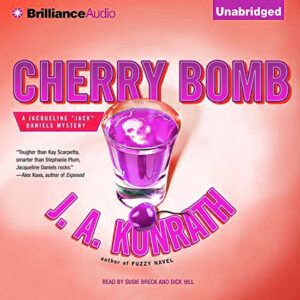 It’s the killer, escape frenzy Alex Kork, taunting Jack, drawing her into a twisted game of cat and mouse.
Because while Alex is willing to kill random victims, Jack is her real prey. But which woman wants revenge more?