Cold Reign is a science fiction book in the Jane Yellowrock series by Faith Hunter.
Jane Yellowrock is a shape-shifting hiker… and the woman that fake vampires fear the most.
Jane walked lightly and carried a large stake to keep the peace in New Orleans. It’s all part of her job as Official Executor for Leo Pellissier, Master of the City. But Leo’s reign is threatened by a visit from a delegation of ancient European vampires seeking to extend their dominion. 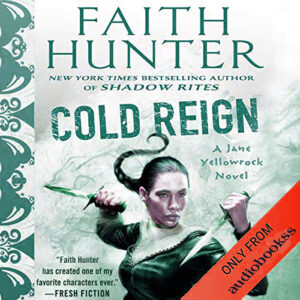 When she heard reports that the venerable vampires were leaving NOLA and out to get blood, Jane put them down – and discovered there was something unusual about these reverends. They should never come back to life.
Jane must test her powers against a deadly, unnatural magic beyond human comprehension and a ruthless group of near-unlimited immortals.