Dead Ice is the 24th love story in the Anita Blake, Vampire Hunter series by author Laurell K. Hamilton.
Anita Blake has the highest murder count of any vampire executioner in the country. She is a US Marshal who can feed zombies with the best of them. She and the master vampire Jean-Claude are publicly engaged, all she is to anyone and everyone is Jean-Claude’s fiancée. 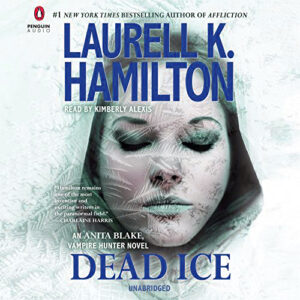 Luckily, in the professional world, she’s still the expert on zombie issues. And now, the FBI is having a zombie problem.

Anita has seen her share of monstrous zombies, so this shouldn’t bother her. The women who became victims were not just rotting, heartless corpses. Their souls are trapped behind their eyes, signaling witchcraft of the darkest kind.