Demon in White is the third science fiction book in the Sun Eater series by author Christopher Ruocchio.
For nearly a hundred years, Hadrian Marlowe served the empire in its war against the Cielcin, an evil alien race that wanted to destroy humanity. Rumors of a new king among the Cielcins have ascended to the throne. It does not attack the territories of the frontier world, preferring precise, strategic attacks on the human empire. 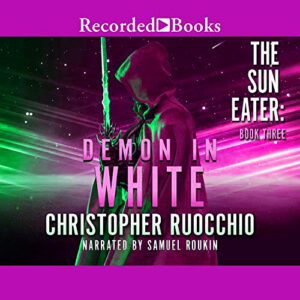 Hadrian’s rise to prominence proved dangerous for himself and his team, as those in the imperial government either distrusted or were dissatisfied with his newfound influence.

Caught in the middle, Hadrian must confront the enemy in front and behind.

Hadrian defied death. He’s back. But the key to the only place in the universe where Hadrian can find the answers he seeks lies in the hands of the emperor himself.