Duke of Midnight is the sixth novel in the Maiden Lane series by author Elizabeth Hoyt.
Twenty years ago, Maximus Batten witnessed the brutal murders of his parents. Autocratic Duke of Wakefield, he spends his days ruling Parliament. But at night, disguised as the Ghost of Saint Giles, he prowls the grim alleys of Saint Giles, always on the hunt for the killer. One night, he finds a fiery woman who meets him foot by foot. 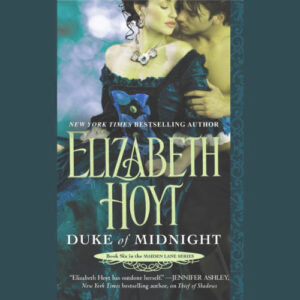 Artemis Greaves became a lady’s companion, but hidden beneath her simple brown dress was the heart of a female hunter. When the ghost of St. Giles saves her from paws, she recognizes a kindred spirit – and is intrigued.

Artemis made a bold move: she asked Maximus to use her influence to free her captive brother. Now that she has a tiger’s tail, can she withstand his fury – or the temptation of his arms?