Duke of Pleasure is the eleventh literary fiction book in the Maiden Lane series by author Elizabeth Hoyt.
Hugh Fitzroy, Duke of Kyle, is the king’s secret weapon. Sent to defeat the infamous Lords of Chaos, he is ambushed in a London alley. He is rescued by an unlikely ally: A masked stranger with the unmistakable curves of a woman. 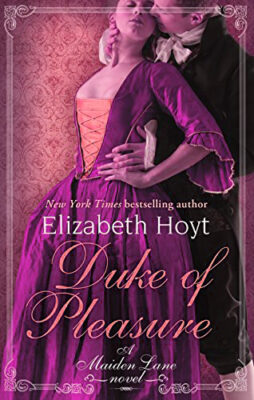 Alf has survived the treacherous roads of St. Giles by disguising her gender. By day she is a boy, dealing with information and secrets. At night, she is the infamous Ghost of St. Giles, a masked vigilante. But when she saved Hugh from an assassin, she found herself unable to succumb to the temptation.

Hugh Fitzroy, Duke of Kyle, was the illegitimate son of King George II, who used him as a sort of spy for work he couldn’t trust anyone else to do. Hugh’s current investigation is about the Lords of Chaos, a secret society of nobles, similar to The Hellfire Club. One night, Hugh is ambushed by their assassins, but is saved by a notorious policeman known as the Ghost of St Giles – who turns out to be a woman.