Greyhound is a literary fiction book by author C. S. Forester.
The mission of Commander George Krause of the United States Navy was to protect a merchant convoy of 37 ships crossing the icy North Atlantic from the United States to Britain. They will provide much-needed supplies, but only if they can overcome the wolves of German submarines that await and outnumber them in the treacherous waters. For 48 hours, Krause will play desperate cat-and-mouse against submarines, fighting exhaustion, hunger, and thirst to protect $50 million worth of cargo and the lives of 3,000 men. 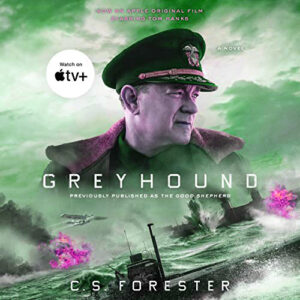 This is a World War II and naval warfare classic by one of the 20th century’s masters of sea stories.
This book is about the mind of the captain and his very personal and human struggle against invisible ships. We are not used to tired, hungry heroes who want to take the lead but can’t because they have to command the ship. This is the story of that hero. It puts a very personal and human face on what we normally consider a mechanical and impersonal logistical struggle.