Keep Your Enemies Closer is the 11th book in the Alison Brownstone series by Judith Berens, Martha Carr, and Michael Anderle.
Alison spills the Tapestry’s blood, but has she defeated them yet? 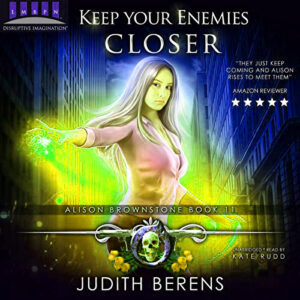 Her nemesis works under the radar, Alison thinks she has time to consider pet parks and PR work, but when the mysterious magic-enhancing potion Ultimate arrives in Seattle, she faces a challenge. Conspiracy shock can spread from Las Vegas to Seattle. Brutal magicians ready to experiment are flocking to town, including a mysterious and dangerous woman testing a newer form of Ultimate.
Dark experiments create evil whispers.

Alison’s informant, Vincent, was acting sketchy – even more so than usual. Alison’s investigations now force her to risk herself and her people to protect a man she doesn’t even like. In a city like Seattle, accepting some gray is necessary for the greater good.

Ultimate is turning humans into monsters. Alison will need the help of the PDA before Seattle is overrun with twisted creatures.

Can Alison resist the converging plots and solve the mystery of Ultimate before it’s too late?”

The only problem I have with these books is that honesty has a weird tendency to…so not telling someone something is You Lied To Me territory..Hmmmm not so much and Mason’s boyfriend says he’s glad Allison told him her secret.. of course!!! It’s not her secret to say, it’s her dad’s secret! So being honest between partners involves telling your partner other people’s secrets?

I don’t think so, some secrets are not yours to tell, they belong to someone else and you need to tell your partner that you can’t tell them other people’s secrets or problems. Retired cop here..there are times when I can’t talk about those things even if it makes me sad or upset.

And don’t tell someone something It’s not the same as lying!
I never lie…However, sometimes I just keep quiet. It keeps me working. I also had a stint as a bookkeeper for a business. I’m not talking about that either. It’s all on the board but it’s nobody’s business but the owners of the business and of course the IRS. Not my friends or my spouse, or anyone else… secrets aren’t always bad!