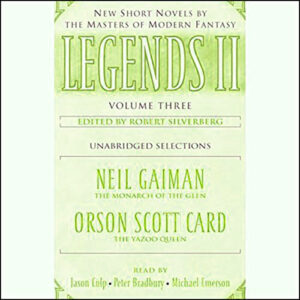 Robert Silverberg tells a mesmerizing tale of Majipoor’s early history – and distant future – as seen through the eyes of a gifted poet who discovers an unexpected fate in “The Book of the Dead.” change”.
Neil Gaiman gives us a glimpse of what happens to the man known as Shadow after the events of the American Gods novel.
Orson Scott Card tells a story about Alvin Maker and mighty Mississippi, there are some useless people named Jim Bowie and Abe Lincoln, in “The Yazoo Queen”.

“Legends II: Dragon, Sword, and King” combines the short stories of the five best-selling authors in the fantasy genre in the second half of the first Legends anthology. Edited by Robert Silverberg, this collection features former authors such as George R.R. Martin and Orson Scott Card with newcomers Terry Brooks, Diana Gabaldon and Elizabeth Haydon. All are connected to the author’s most famous established universe; however, the success of each story is how quickly the reader makes sense of the universe connected to it.

The first three stories in this volume are the best of the five, whether stand-alone or part of a prequel series, they succeed in that the reader only needs to know a minimum of the universe written by the author. set no matter how long their story is. . The last two stories while quite okay due to the reader trying to understand some aspect of the established world or in the case of a story with no clue of the significance of anything because of the story is the end of a series.