Be the Girl is a children’s book by author K. A. Tucker.
This is a poignant coming-of-age story about a girl trying to change her future while hiding from her past. 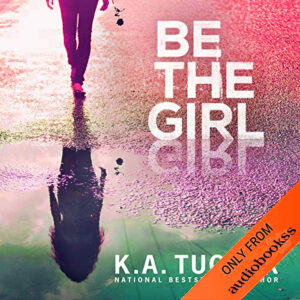 Almost 16-year-old Aria Jones is starting over. New postal codes, new surnames, new rules. She doesn’t mind, because that means she could leave painful regrets behind. In the bustling town of Eastmonte, she could be someone else.

With the Hartford family living next door, it looks like she’ll be successful. Sure, Cassie Hartford may be the epitome of social awkwardness thanks to her autism, but she also offers an innocent and sincere friendship that Aria learns to cherish. And Cassie’s brother, Emmett – a famous Junior-A hockey player with a bright future – then… Aria wishes that friendship could lead to something more. If he doesn’t have a girlfriend yet, it probably will.

Aria soon finds herself in a moral predicament that could derail her efforts at a fresh start. It is her loyalty to Cassie and her growing affection for Emmett that prompts her to take a risky move. An act that makes her an archenemy, determined to tear her happy new world apart.