Beautiful Resistance is a book by author Jon Tyson.
God is calling His people to join a beautiful resistance movement.

We live in a time when our culture is becoming more and more shallow. Radical changes in the spheres of sexuality, morality, technology, secular ideology and religion make the familiar scene of a generation ago almost unrecognizable. 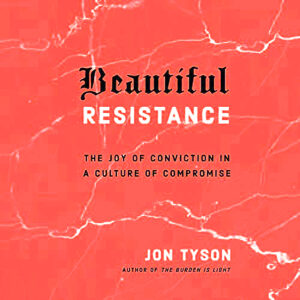 During World War II, pastor and theologian Dietrich Bonhoeffer was deeply puzzled by the compromises in the German church. Their surrender to the Nazi party brought shame and disgrace to the gospel. He helped create an underground movement of disciple-making churches and eventually sought to renew the church and culture of the day.

In our compromised church, we need new underground movements of disciple-making and protest. The widely respected New York pastor Jon Tyson has revealed a renaissance vision of faithful discipleship—one that dares to renew culture, restore credibility, and replace compromise with trust.