By a Thread is the sixth literary fiction book in the Elemental Assassin series by author Jennifer Estep.
By a Thread opens shortly after Spider’s Revenge ends. Big and bad mabs may disappear, but threats remain. Sure, they’re not nearly as deadly as Fire Elemental but they’re very annoying and looking over her shoulder and scaring innocent customers on a daily basis is starting to stalk Gin. It seems like everyone wants a chance to prove they can take down Spiders. Add to that the fact that she’s still uncertain about her shaky relationship with Bria and has more than enough stress to turn around. A vacation seems like the perfect solution, doesn’t it? Well, not if you’re an assassin, retired or not. No wonder Gin & Bria got into trouble when they weren’t even looking for it. 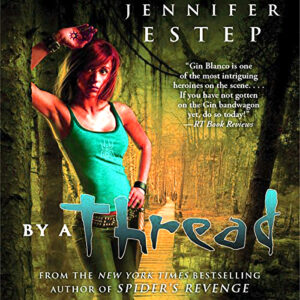 Of course the usual cast and crew are present: Jo-Jo, Sophia, Bria, Finn, Owen and even Fletcher. There are a few new characters thrown into the mix along with a notable explosion in the past. I’m sure many of you know who I’m referring to, but I won’t mention his name…just say whatever he gets in this book that he has arrive. and then, few. I believe the vampire bad guy in By a Thread will let Mab run away for her money. He is beyond ruthless and rather despicable in the way he achieves his powers.