Cold as Ice is the second mystery novel in the Ice series by author Anne Stuart.
The job was supposed to be easy: deliver some legal papers to billionaire philanthropist Harry Van Dorn’s lavish yacht, get his autograph, and it’s done. But Manhattan attorney Genevieve Spenser soon realized that she had come to the wrong place, at the wrong time, and that the benevolent public playboy had a sickly evil side.
As he tries to make her his toy for the evening, eagerly uses and abuses her until he discards her along with the rest of his victims. Genevieve must keep her wits if she is to survive the night. 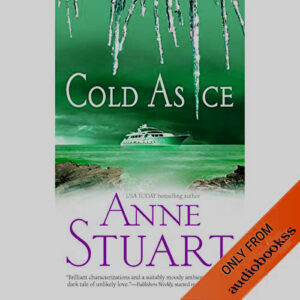 But there was someone else on board the ship who knew the true depths of Van Dorn’s evil. Peter Jensen is not just the humble personal assistant he pretends to be. He is a secret agent who will stop at nothing to make sure Harry’s deadly Rule of Seven terror campaign dies with him. But Genevieve’s presence has put a wrench in his plans, and now he must decide whether to risk his quest to keep her alive.