Death by Deceit is the fifth mystery novel in the Caribbean Murder series by Jaden Skye.
Cindy and Matttheus, together at last, are about to live together – when a wonderfully unpleasant relationship drives them apart. Cindy flew home to New York, resigned to never work as a detective – and never saw Matttheus again. 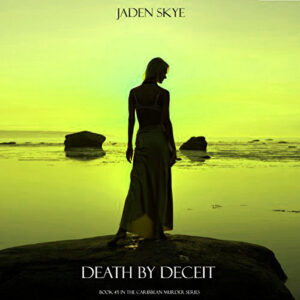 A new body has appeared. At first Cindy refuses – until he tells her who she is: his wife. They finally found her, on the shores of Key West. They are suspected of being brutally murdered by an abusive boyfriend. Mattheus’ world is turned upside down, and Cindy has no choice but to fly down to the archipelago and help him discover what really happened. How did she show up in Key West, so far, compared to where he last saw her? Why has she never contacted him? Who did she date? And did the police catch the right man?