Feverborn is the eighth love book in the Fever series by author Karen Marie Moning.

Mac, Barrons, Ryodan and Jada are back – and the stakes have never been higher and the chemistry has never been hotter. A realm of labyrinthine intrigue and perfect seduction, Feverborn is a gripping tale of ancient evil, lust, betrayal, forgiveness, and the redeeming power of love. 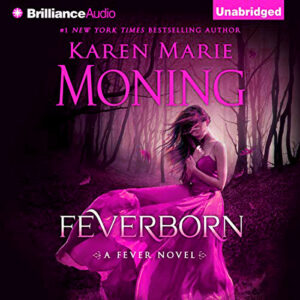 When the immortal Fae destroyed the ancient wall separating the worlds of Man and Faery, the structure of the universe was damaged, and now the Earth is disappearing little by little. It took a long time for The Song of Making – a haunting, dangerous tune and the source of life itself – that could save the planet.

The mythical song seeker must face old wounds and new enemies, burning passions and a deep-running thirst for revenge. Keltar’s war with the nine immortals has secretly ruled Dublin for all eternity, Mac and Jada are hunted by the masses, the Seelie queen is nowhere to be found, and the most powerful Prince Unseelie of all creation determined to dominate both Fae and Man.

Dublin is now a dangerous magical city with just a little bit of ordinary magic. And on the streets ravaged by war, Mac will face her most savage enemy