Holy Warrior is the second literary fiction book in The Outlaw Chronicles series by Angus Donald.
The sword will swing. Heroes will fall. Legends will live. And the Holy Land will never be the same. AD 1190: Richard the Lionheart launches his epic crusade to capture Jerusalem from the evil Saracens. Marching with a large army of royals is England’s most famous, feared, fiercest warrior: the Nottingham outlaw, Earl Locksley – Robin Hood himself. 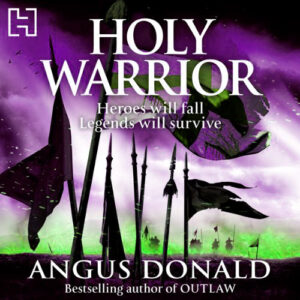 The group of loyalists by his side, Robin cuts a bloody cut on his brutal journey east. Bold and dangerous, he can outwit and outlast any foe – but the fiery red battlefields of the Holy Land are the ultimate proof.

In Robin’s camp lurks a traitor – a stealthy foe determined to destroy Christendom’s greatest outlaw before the trumpet sounds. Holy Warrior is the most thrilling, thrilling adventure.