Leave It as It Is is a history book by author David Gessner.

Theodore Roosevelt declared when he first saw the Grand Canyon. “The ages have worked on it and man can only spoil it.” Roosevelt’s proclamation signaled the beginning of an environmental war that is still raging to this day. President bravely defended it, famous writer of nature. David Gessner, embarks on a great American road tour guided by Roosevelt’s legacy of environmental crusade. 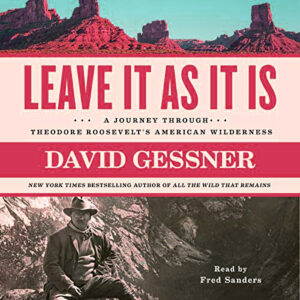 Gessner travels to the barren land of Dakota where Roosevelt awakens as a naturalist; to Yellowstone, Yosemite, and the Grand Canyon where Roosevelt had escaped in preparation for his re-election tour. Finally, to the Bears Ears, Utah, a monument proposed by the Indigenous Tribes now engaged in the national conservation war. Along the way, Gessner questioned and reimagined Roosevelt’s vision for the lands today.