Legacy of Lies is the first mystery novel in the Bocephus Haynes series by author Robert Bailey.
A small-town lawyer takes on prejudice and corruption in this powerful legal thriller. 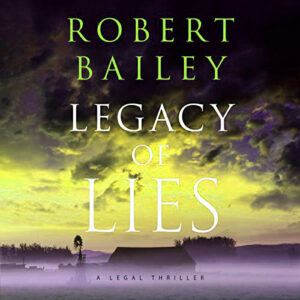 Small town attorney Bocephus Haynes came home late one night to find County Attorney General Helen Lewis waiting for him. Her ex-husband had just been killed. She’s about to be arrested for killing him. She wants Bo to represent her.

There is a lot of work against them. Before her death, Helen’s ex-husband threatened to reveal the dark secret of her past. Bo has been in a difficult situation since his wife’s death. His whole life has been defined by a crime against his family. He continues to face prejudice as the only African-American petitioner in Pulaski, Tennessee.

Bo’s back leans against the wall, and Helen submits to a grim fate – but a stunning discovery throws everything into chaos. An opportunity for justice, but in order to achieve it, the cost may be too much for Silver to bear.

I’ve read and really enjoyed all of Robert Bailey’s books and am proud that he’s a fellow Huntsville resident. My friends and I get a kick out of his mentioning places that we recognize. He got me with this one! I would think I’d know where the story was going, only to have Bo get stopped once again and have to try another direction to exonerate his client.

There’s also some pretty major stuff going on in his private life to keep the reader’s attention, as we root for him to work things out. Bailey’s books generally keep you guessing, but this one seemed to have one surprise after another. I can’t wait until my husband reads it, to see what he thinks at different parts along the way. If you enjoy this book and I know you will, you may want to go back and read his other’s. Great story teller!