Pathfinder is the first book in the Pathfinder series by renowned author Orson Scott Card. The story revolves around the character Rigg, he is well trained to keep secrets. His father noticed that Rigg looked out into the human past. He can’t see the past and can change the future of people, this is a secret that his father always kept from him until his father’s death. 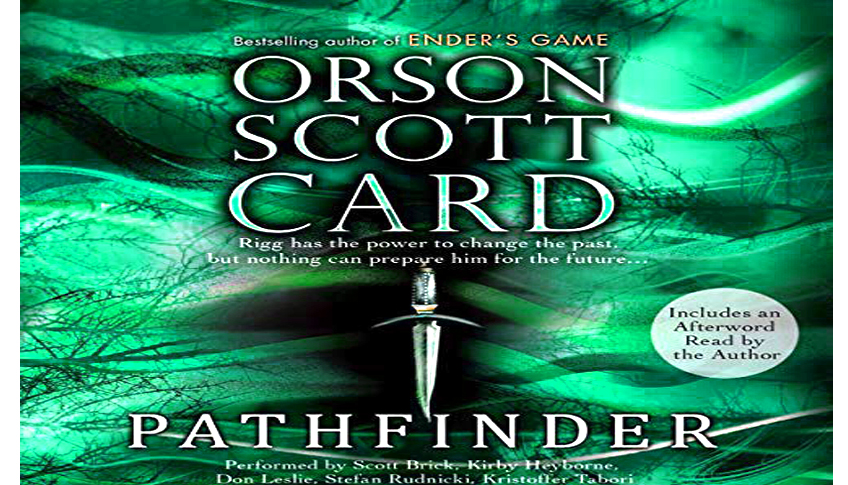 I find myself very conflicted about this book. I like Card and consider him to be a good author. His premise is interesting and entertaining. However, as an audio experience, this book was often irritating. Much of the dialogue throughout is extremely pedantic . For example, if one character says that the people of a town are unfriendly, another character will point out that they haven???t met everyone. If someone suggested that the light goes out in a refrigerator when you shut the door, another will point out that, unless you are inside the refrigerator, you really don???t know. If I was reading the book, I???d probably tend to scan a lot of the dialogue. Audio makes you listen to every irritating exchange. I slogged through it to the end. The ending was okay, but I am not interested in what happens in the next book and will not listen to this book again. I don???t recommend it.

A lot to recommend

There was a great deal to like about this book. I liked the references to biology/evolution and physics/time-travel. Anytime one deals with time-travel there is always the inevitable “paradox” to deal with. While an important and necessary commentary, sometimes Card seems to overdo it with dialogues on the paradoxes.

In the production, I did not care for the use and switching of multiple narrators for the same characters. That makes no sense whatsoever and must have had something to do with the audio production itself. All of the narrators were very good but the lack of consistency was distracting and detracted from the work.

I have wanted to read Card before this book. I have been very tempted to begin the Ender series on many occasions but hesitated because so much seemed to revolve around children. Personally, I have raised 7 children and, while a wonderful experience, I am ready and have moved on to more adult dialogues. The childish conversations in the book and the way they were narrated sometimes seemed a bit contrived and unsatisfying. It was one of the main reasons I gave up on the Wheel of Time after about 4 of the books.

The plot and character development were excellent. The hero, while young, was quite multidimensional [no pun]. Not a great deal but probably sufficient time was spent describing the scenes. The politics were simply Machiavellian and not much variety or alternatives there.

The melding of past and present, medieval and futuristic is excellent. The confluence and reconciliation of these in the end is beautifully done. And, while Card gives the reader a quite satisfactory and satisfying ending, enough is left unfinished to warrant a Part 2. And I am very much looking forward to the continuation. After Part 2 I’ll reconsider Ender.

Ingenuous plot but Card uses time travel to justify his conclusions. Protagonists can remedy problems by traveling back in time and modify events. I could never be sure that the facts on the page I was reading would still be the facts I would read in the next chapter.