We Hunt the Flame is the first book in the Sands of Arawiya series by author Hafsah Faizal. The story follows Zafira as a hunter, disguised as a man as she bursts into the cursed forest to feed her people. If Zafira is revealed to be a girl, all her achievements will be denied. Both Zafira and Nasir are legends of the Arawiya kingdom. 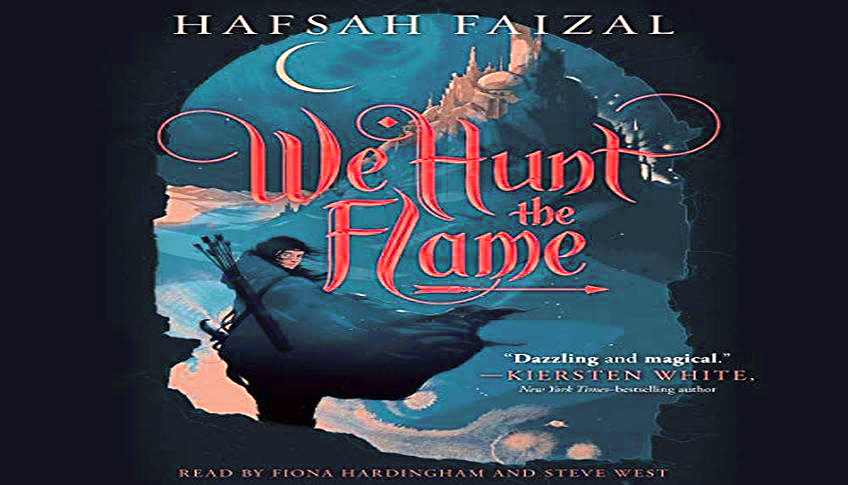 Review 1: We Hunt the Flame – Sands of Arawiya Book 1 audiobook by SarahH

Let me start by saying I really enjoyed this book! I love a lot of the tropes she used. But if you’ve read Ember in the Ashes or Shadow & Bone, you’ve seen the characters and plots before. The twists aren’t too surprising and once the characters are introduced, you kind of know their role in the story. That’s not necessarily bad if you like the tropes. The author delivers on the tropes pretty well…
… except for the Big Bad Guy. You never really find out what his motives are or why does the bad things he does. Maybe that’s a book 2 thing? It was a bit frustrating not knowing that.
I liked the setting but sometimes I wished I had the physical book because I got confused by some of the (Arabic?) terms that got casually tossed around and were pronounced differently by the 2 narrators. I liked having them in the story, and for the most part, the context clues defined the terms. But I did get a bit lost at times.
As always, these 2 narrators were FANTASTIC! But there were some production issues where you could hear cuts and edits.

Review 2: We Hunt the Flame – Sands of Arawiya Book 1 audiobook by Faiza Ambah

Every Arabic word is mangled.

Excellent and fresh and interesting story. But the mangling of every Arabic word is very annoying and detracts from the listening. If there are no narrators who can pronounce Arabic can the narrators at least find out how the Arabic words are pronounced?

Review 3: We Hunt the Flame – Sands of Arawiya Book 1 audiobook by Emma Stephens

I couldn’t make it past the first few minutes because the audio was horrible. I sounded like the re-recorded sections and the quality wasn’t the same, or it was a different narrator all together. I would rather give a standard copy of the book a go rather than listen to bad audio.